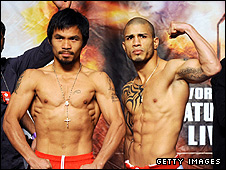 Manny was simply superb – very lively, darting in and out, punched with lightning speed and accuracy and although he stepped up in weight, it did not show one bit. Cotto landed a few good punches, but Manny seemed unperturbed by them. Manny had Cotto down a couple of times before the referee stopped the fight in the last round. Manny dominated the fight and proved that welterweight power ain’t a problem for him and his iron chin, by demolishing a great welterweight champion.

Now, the fight every boxing fan will want to see is Manny Pacquiao Vs Floyd Mayweather Jr. Both these boxers are the top two contenders for the planet’s best pound-for-pound boxers and exhibit excellent boxing skills and speed. A fight between them is a mouth-watering prospect!