How to deal with concurrent mode failures in the Hotspot JVM

When using the Concurrent Low Pause or Concurrent Mark Sweep Garbage collector with a Sun Hotspot JVM, you may observe the following "concurrent mode failures" errors in your GC logs or stderr:

When does it occur?: A concurrent mode failure typically occurs with the following scenarios:

(1) Heavy load: Heavy load on the application running in the JVM, causing a huge promotion from the young to the tenured generation is typically what causes concurrent mode failures.

How to fix it?: To fix these concurrent mode failures with JVM 1.4, typical solutions are:

(2) Tune the JVM depending on your application profile.

(3) Scale your platform to distribute load and subject each JVM to a smaller load.

JVM Tuning: My colleagues and I observed that our Hotspot 1.4.2_11 JVMs running WebLogic 8.1 SP6 threw several concurrent mode failures during peak load, at specific times of the day. The JVM heap for each WebLogic managed server was 2 GB which was already quite big (cannot increase much more anyway, as were using a 32-bit 1.4.2 JVM on Solaris 9). So, we decided to tune the JVM. Here are details of our JVM tuning to significantly reduce the number of concurrent mode failures:

(1) JVM Options before tuning: Given below, are the JVM parameters used when the problem occurred (WLjvm output):

(2) GC Analysis: I used PrintGCStats to analyze GC logs. It is also important to determine the CMSInitiatingOccupancyFraction (the % occupancy of the tenured generation at which a CMS GC is triggered). As the JVM options above do not set this parameter, the JVM calculates its own CMSInitiatingOccupancyFraction  at runtime. The default for JVM 1.4.2 is 68%, but do NOT assume that the JVM always uses the default if you do not specify this parameter. Instead, analyze the GC logs to understand when the JVM triggers a CMS GC. The script CMSGCStats.ksh (formerly CMSGCTrigger.ksh) may be used for this purpose, along with the provision of other metrics. By using PrintGCStats and CMSGCTrigger.ksh, we determined that a lot of objects were promoted to the tenured generation and CMS GC was mostly triggered at 50% occupancy of the tenured generation with some occurrences between 60% to 75% also.

(3) Requirements Analysis: Our application mostly created short-lived objects and very low latency was not critical due to the mostly asynchronous services provided by the application. Hence, our goal was to retain most of the objects for as long as possible in the young generation, to facilitate their garbage collection in the Young generation, thereby promoting fewer objects to the tenured generation and reducing the probability of filling up the tenured generation during a CMS GC (causing concurrent mode failures).

In order to garbage collect objects in the Young Generation and decrease the number of objects being promoted to the tenured generation, we tuned the following parameters:

In order to override the JVM’s choice of when to trigger a CMS GC in the tenured generation, we tuned the following parameters:

(5) Results: Based on 5 iterations of testing with different sets of the parameters mentioned above, we obtained best results with the following JVM parameters:

Some graphs of parameters before (baseline) and after JVM tuning for 4 WebLogic managed servers are given below: 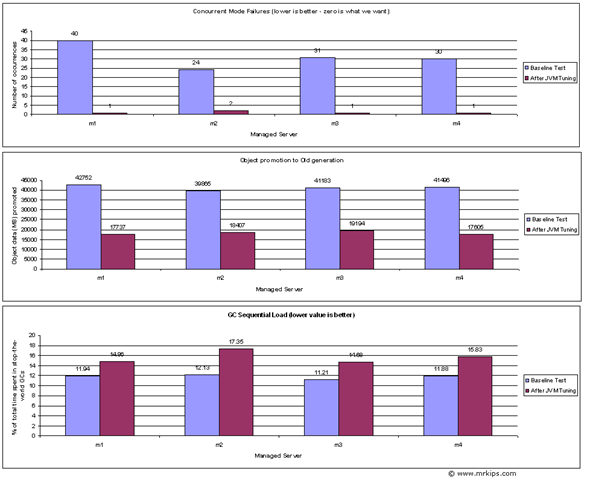 The above graphs indicate the following:

(1) The number of occurrences of "concurrent mode failures" significantly decreased after JVM tuning, although these errors weren’t eliminated.

(2) The amount of objects (MB) promoted from the young to the tenured generation significantly decreased after JVM Tuning, thereby indication more garbage collection in the young generation.

(3) The GC Sequential load (% of total time spent in GC with all application threads suspended) increased after JVM Tuning. Although this is not desired, given that our application did not require very low latency, we were willing to make a compromise and accept the increase in GC Sequential load. As a matter of fact, when our JVM changes were rolled out onto Production, the GC Sequential load was only around 1%.  We were just being cautious and testing our changes on a test environment with very high loads.

NOTE: The tuning exercise described above worked well for us. However, depending on your scenario, you may have to do further tuning. Also, there’s only so much you can benefit by tuning a JVM and you must give due consideration to scaling the platform and/or application design. In the example above, although JVM tuning helped, the load on our platform was too high and we had to scale our platform by adding more WebLogic managed servers (JVMs). Problems such as "concurrent mode failures" are typically caused by high loads when the CMS GC isn’t able to keep up with the rate of allocation of objects in the tenured generation.

(1) When the Sum of the parts – Jon Masamitsu

(2) What the Heck’s a Concurrent Mode? – Jon Masamitsu