In Oracle WebLogic (formerly BEA WebLogic) versions prior to version 10.0, WebLogic Servers relied on IP multicast to ensure cluster membership (versions 10.0 and later provide the alternative of Unicast which is preferred over Multicast). This article will pertain to IP multicast used by WebLogic.

What is IP multicast? 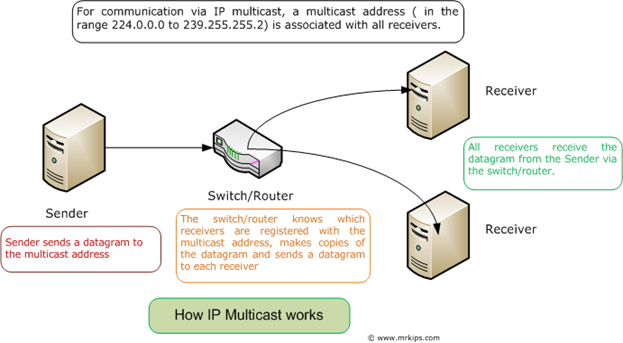 Why does WebLogic use IP multicast?

(1) Cluster heartbeats: All servers in a WebLogic cluster must always know which servers are part of the cluster. To make this possible, each server in the cluster uses IP multicast to broadcast regular "heartbeat" messages that advertise its availability.

(2) Cluster-wide JNDI updates: Each WebLogic Server in a cluster uses IP multicast to announce the availability of clustered objects that are deployed or removed locally.

How does WebLogic use IP multicast?

The figure below illustrates how a WebLogic cluster uses IP multicast. 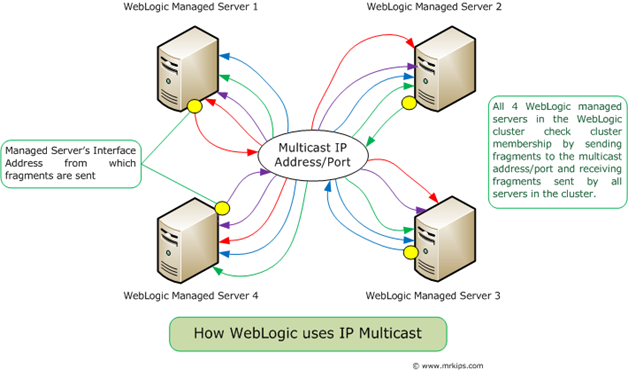 How do you configure and test multicast for a WebLogic Cluster?

Configuring IP Multicast for a WebLogic Cluster is simple. The steps required are given below:

STEP 3: After successfully testing the multicast address and port, you may use the WebLogic Administration Console to configure multicast for the cluster. Descriptions of various multicast parameters are available on the console itself. The three most important parameters are (1) Multicast Address, (2) Multicast Port and (3) Interface Address. The Interface Address may be left blank if the WebLogic servers use their hosts’ default interface. On multi-NIC machines or in WebLogic clusters with Network channels, you may have to configure an Interface Address. Given below is a screenshot from a WLS 8.1 SP6 Administration Console indicating the various multicast parameters that may be configured for a cluster. Note that the interface address is on a different screen as it is associated with each server in the cluster, rather than the cluster itself. 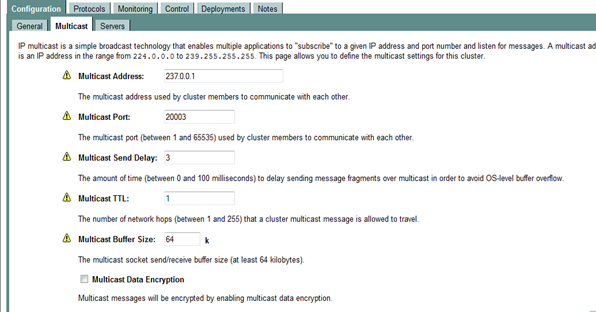 After configuring Multicast for a WebLogic cluster, you can monitor the health of the cluster and exchange of multicast fragments among the servers in the cluster by using the WebLogic Administration console. A screenshot of such a monitoring screen with WLS 8.1 SP6 is given below:

Note that the screenshot above indicates that:

(1) All servers are participating in the cluster ("Servers" column).

(3) The total number of fragments received by each server (34) is equal to the sum of all the fragments sent by all the servers in the cluster (17 + 17). Note that the "Fragments Sent" and "Fragments Received" columns on the console need not always indicate a correct relationship even if multicast works fine. That’s because these stats on the console are reset to 0 when servers are restarted.

Given below are WebLogic multicast problems which I’ve encountered and investigated, along with solutions that worked:

SYMPTOMS: All WebLogic servers could not see any other server in the cluster. Tests using the MulticastTest utility failed indicating that all servers could only receive the multicast fragments which they sent out.

ANALYSIS: The MulticastTest utility was tried with the correct multicast address, multicast port and interface address. No conflict with any other cluster was observed, but no messages were received from other servers. Assuming that all servers in the cluster are not hung, the symptoms indicate a problem with the underlying network or the multicast configuration on the network.

Solution 2: The Network Admin informed us that more than one switch was used on the cluster network and this configuration did not ensure that multicast fragments sent by one server in the cluster were copied and transmitted to other servers in the cluster. Refer to this CISCO document for details regarding this problem and its solutions. As a tactical solution, the Network Admin configured static multicast MAC entries on the switches (Solution 4 in the CISCO document). This tactical solution requires the Network Admin to maintain those static entries, but since there weren’t too many WebLogic clusters using multicast on the network, this solution was chosen.

Solution 3: The two managed servers in a cluster were in geographically separated data centres and several hops across the network were required for the servers to receive each other’s multicast fragments. Increasing the multicast TTL solved this problem and both the MulticastTest utility and the WebLogic servers successfully multicasted.

SOLUTION: The WebLogic server host was a multi-NIC machine and another interface had to be specified for communication with the multicast address/port. Specifying the correct interface address solved the problem.

SYMPTOMS: The following errors were seen in the WebLogic managed server logs. The managed servers were running, but clustering features (like JNDI replication) were not working.

SOLUTION: The WebLogic server kips_managed1 used -Dhttps.nonProxyHosts and -Dhttp.nonProxyHosts JVM parameters in its server startup command and these parameter values did not contain the name of the host which hosted kips_managed1. After including the relevant hostname in these parameter values, the errors stopped occurring. I am not sure how these HTTP proxy parameters affected self-generated multicast messages (will try to investigate this).

ANALYSIS: The problem occurred intermittently when the WebLogic servers were running, but never occurred when using the MulticastTest utility. This indicates that the underlying IP multicast works fine and something is preventing the servers in the cluster from IP multicasting properly. Further analysis revealed that the servers had issues with JVM Garbage Collection with long stop-the-world pauses (> 30 secs) during which the JVM did absolutely nothing else other than garbage collection. Also, the times of occurrences of these long GC pauses correlated with the times of increases in LostMulticastMessageCount and removal of servers from the cluster.

SOLUTION: The JVMs hosting the WebLogic servers were tuned to minimize stop-the-world GC pauses to allow the servers to multicast properly. For the specific GC problem I encountered, you may refer to the tuning details here.

Your rating of this post will be much appreciated. Also, feel free to leave comments (especially if you have constructive negative feedback).