How Terraform works with Infrastructure states

The image below explains how Terraform operates with different “states” of your infrastructure. 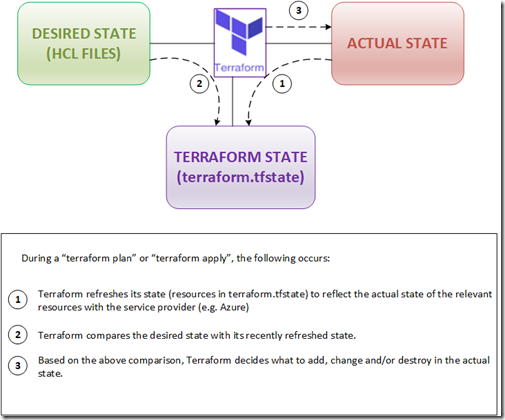 Now, let’s use the above with a couple of scenarios.

SCENARIO 1: Using Terraform for the first time to provision a VM on an existing infrastructure (e.g. Azure/AWS).

The infrastructure already has VMs and is not managed by Terraform. You decide to provision a VM with Terraform. After preparing your HCL files, when you perform a “terraform plan”, the following occurs:

SCENARIO 2: Add tags to the Terraform-provisioned VM directly via  the provider’s UI

Let’s say you add tags to the Terraform-provisioned VM (scenario 1) directly via the UI (Web Portal). When you perform a “terraform plan” of the VM’s HCL code (as in scenario 1) again, the following occurs:

So, as you can see, once you commit to using Terraform for your infrastructure, you must be all-in!! If you get this right, you will certainly benefit. You may experience issues and frustrations as the infrastructure gets more complex and you’ll have to determine what works best for your environment.

There are several other IaC tools out there (Ansible, Chef, Puppet, CFEngine, Saltstack, etc.) and infrastructure providers also have CLIs and REST APIs. Every tool has its pros and cons, but the bottom line is that it will eventually pay off to use IaC (irrespective of the tool) with benefits such as cost reduction (more automation => smaller teams), risk mitigation (reduces human error) and increased efficiency.