If e-reader manufacturers optimize e-readers for reading news (i.e. provide an easy transition from the ubiquitous newspaper), then this would be the first step towards the decline of the newspaper print media and a great stride forward in the digital age. There are several e-readers available, with Amazon.com sparking a lot  of interest with its Kindle. However, all e-readers currently available are not ready to replace the newspaper given their small displays and accessibility to news. With LG’s development of a 19in flexible e-reader (see image below), e-readers can move one step closer towards replacing newspapers. 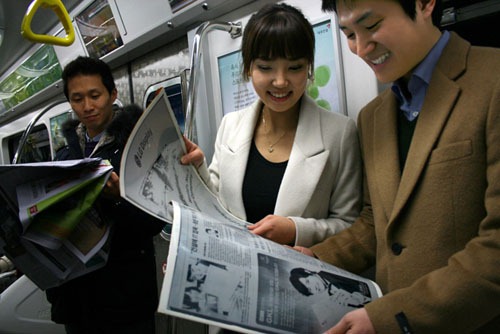 e-Newsreaders will have a large market in developed countries. Developing countries won’t have a market for such devices unless they come out of poverty (to make such devices affordable to the genral public) and literacy is high (to get people to use such devices).

Amazon.com initially ran into loads of trouble with its Kindle, primarily due to some daft decisions (like catering to only US mobile network technologies, thereby preventing world-wide distribution) and like other e-readers, it’s primarily aimed at reading e-books (although the latest Kindle DX aims to make reading news easier with a larger display. Amazon.com’s framework of using the Kindle with its Whispernet was a step in the right direction, but lack of planning caused them many issues.

Knowledge and information are key to a country’s development and consequently making knowledge and information more easily accessible should be the key driver behind devices such as e-readers. However, for this digital dream to become the common man’s reality, a helluva lot of work has to be done and large organizations and governments must work cooperatively with each other.