Synergy is a popular software that shares one mouse and one keyboard between multiple computers. The set up is straightforward, but recently I had a requirement for my Synergy client and server to communicate over IPv6 and I couldn’t find information about IPv6 support. Anyway, I tried and it eventually worked. Here’s what I did for Synergy to work over IPv6 between a Windows 7 laptop (Synergy server) and Windows 10 laptop (Synergy client):

STEP 2: Configure the Synergy server to listen on all IPv6 interfaces, in addition to the IPv4 interfaces by specifying [::] as the Interface in the Settings as shown in the image below: 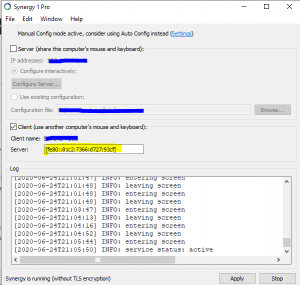 NOTE: Perform network connectivity tests (e.g. using telnet client) to confirm connectivity between client and the synergy port on the server (default port is 24800) over IPv6 prior to setting up Synergy.