It’s been a year since I bought an LCD TV (LG 32LB75) that is capable of accepting 1080p input (HD ready 1080p). However, I’ve only used my LCD TV for viewing SD TV and videos. Well, I’m not ready to invest in Blu-ray or Sky’s HD services now. I thought about trying upscaling (I know it can never be as good as true HD) options until I decide to go down the full HD route and had my eye on Oppo, but Oppo was beyond my budget. Then, while skimming through the electronic products section on Amazon, I came across the the Cyclone Micro HD HDMI 1080p Upscaling Multimedia Player Adaptor selling for around £25 and having rave reviews. So, I purchased the Cyclone Micro just before Christmas 2009. Images of the front and back covers of the Cyclone Micro packaging box are given below: 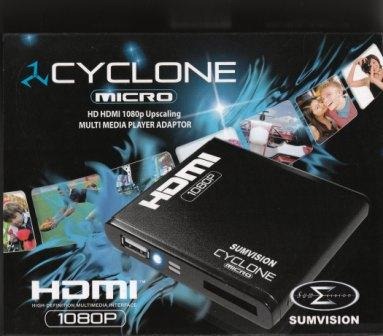 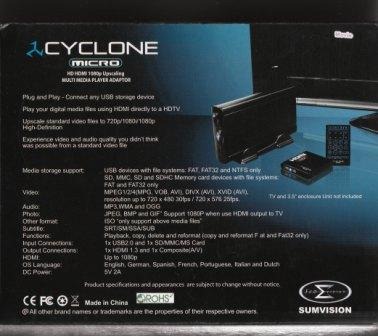 I haven’t experimented using my Cyclone Micro with other video, audio and picture formats, but so far, for my requirement of playing Xvid videos on my LCD TV, I believe that the Cyclone Micro has given me bang for my buck!