First and foremost, if feasible, please consider a Hotspot JVM upgrade. The 1.4.2 JVM is outdated and there have been several significant improvements to GC ergonomics in later Hotspot JVMs. The JDK 1.4.2 Standard edition reached its EOL in late 2008. However, you can purchase support for later updates of JDK 1.4.2 (later than 1.4.2_19) that are branded under Java For Business (JFB) v1.4.2, to receive security updates and critical fixes until 2013. With regards to CMS, Sun engineers were finding their feet with CMS in JVM 1.4.2, enhanced CMS and made it the default collector in JVMs 5 and 6 and are about to replace CMS with G1 (Generation First) in JVM 7.

For those of you still using the Concurrent Mark Sweep (CMS) garbage collector with Hotspot JVM 1.4.2, here’s some information which I hope you will find useful.

What is CMS garbage collector?

When would you use the CMS Collector?

Does CMS require more cpu and memory than the default collectors?

How do you enable the CMS Collector?

Does the CMS Collector require tuning?

You’re lucky if the CMS collector gives you optimal performance by just enabling it with -XX:+UseConcMarkSweepGC. Every Hotspot 1.4.2 JVM I’ve come across (enterprise systems), has required some CMS tuning for optimal performance. Of course, this requirement entirely depends on your application’s object profile. But, if tuning your Hotspot 1.4.2 is required, then tuning CMS requires more effort than tuning the default collectors and CMS has a bunch of JVM flags to play around with. Some important JVM flags to consider when tuning CMS are given below:

What do you need to watch out for when using CMS (problems/gotchas)?

What tools are available to assist you with JVM tuning?

First and foremost, before tuning your 1.4.2 JVM, ensure you profile your application and resolve application issues (e.g. memory leak). To tune your JVM, you have tools which broadly fall under two categories:

Runtime Monitoring: These tools attach to your JVM to provide loads of runtime data. These tools are useful, when you’re monitoring your JVM in runtime and using these tools interactively. An excellent tool is VisualVM and its VisualGC plugin. A screenshot of the VisualGC plugin is given below: 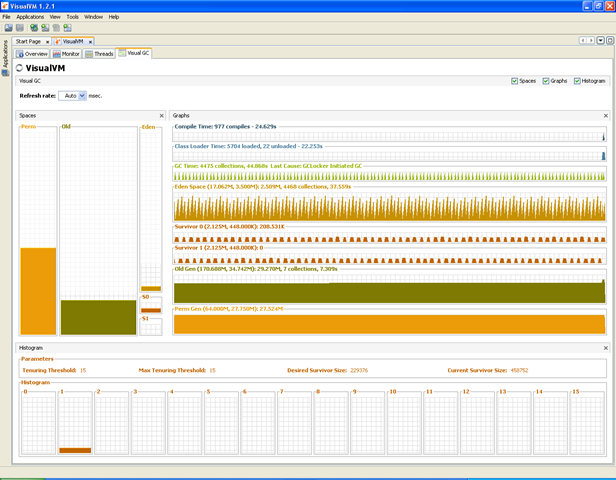 GC Log File Analysis: These tools enable you to do offline analysis of GC log files and prepare reports for trend analysis. If you wish to run a load test for a couple of hours and measure performance after the test, then you will need to capture GC logfiles and analyze them with such tools. Now, in this area, Sun has been lacking good tools. HP chose a wise strategy of defining a specific format for GC logfiles generated by HP JDKs and developing the excellent HPjmeter to parse the logfiles and create fancy charts along with several metrics. Well, the Sun forums indicate that a GCHisto plugin is being developed to analyze Hotspot GC log files. I have tried out this plugin (beta) and found it to be nowhere as comprehensive and sophisticated as HPjmeter. Well, will wait for GCHisto to be completed and plugged into VisualVM before trying it out again.

In order to assist my colleagues and me with Hotspot JVM 1.4.2 GC log file analysis when using CMS, I’ve developed a quick-and-dirty korn shell script to provide a summary of some key GC metrics for a specific GC logfile. You may download the script CMSGCStats.ksh and execute it without arguments (ksh CMSGCStats.ksh) for usage tips. Refer a sample screenshot of the script’s output below: 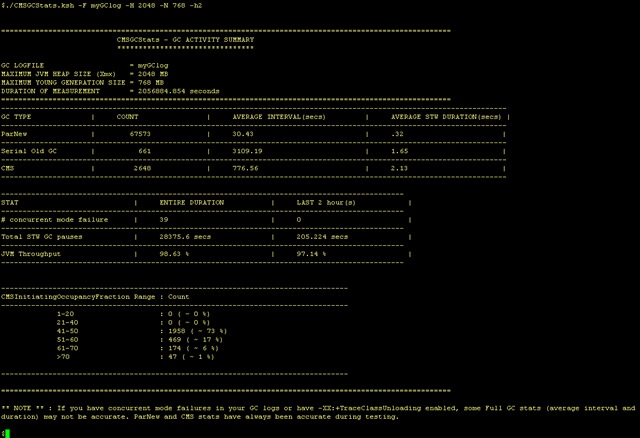